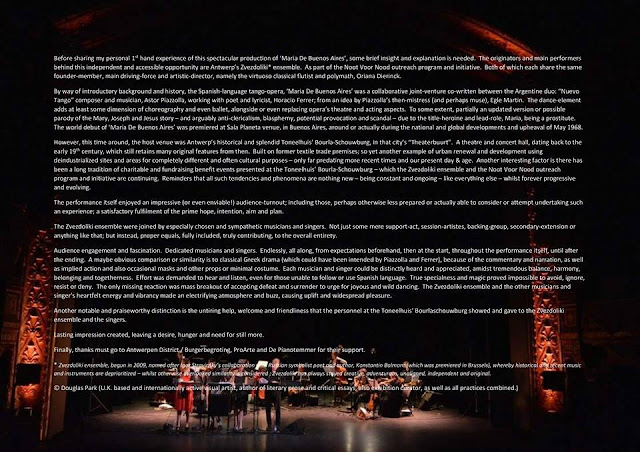 Z V E Z D O L I K I (http://www.zvezdoliki.be) is celebrating its 10th anniversary in 2018. We will record a live album for Evil Penguin Records (http://www.eprclassic.eu/) label 'Antarctica'. This will happen on 3rd and 4th of February in KC Nona (https://www.nona.be/) in Mechelen (BE), an atmospheric former cinema hall. We chose this location because possibly also a film will be made.

And you can be part of this. For already the modest donation of 10 EUR you can help us realize our dream to make the ensemble grow internationally. We are also selling tickets for the live recording days, so here's your chance to a unique experience : a rarely played tango opera 'bijou', performed by leading musicians : the best you can get.

There are different funding perks available, please visit this link and make a donation :
https://www.indiegogo.com/projects/piazzolla-s-tango-operita-maria-de-buenos-aires#/

Before sharing my personal 1st hand experience of this spectacular production of ‘Maria De Buenos Aires’, some brief insight and explanation is needed. The originators and main performers behind this independent and accessible opportunity are Antwerp’s Zvezdoliki* ensemble. As part of the Noot Voor Nood outreach program and initiative. Both of which each share the same founder-member, main driving-force and artistic-director, namely the virtuoso classical flutist and polymath, Oriana Dierinck. By way of introductory background and history, the Spanish-language tango-opera, ‘Maria De Buenos Aires’ was a collaborative joint-venture co-written between the Argentine duo: “Nuevo Tango” composer and musician, Astor Piazzolla, working with poet and lyricist, Horacio Ferrer; from an idea by Piazzolla’s then-mistress (and perhaps muse), Egle Martin. The dance-element adds at least some dimension of choreography and even ballet, alongside or even replacing opera’s theatre and acting aspects. To some extent, partially an updated version or possible parody of the Mary, Joseph and Jesus story – and arguably anti-clericalism, blasphemy, potential provocation and scandal – due to the title-heroine and lead-role, Maria, being a prostitute. The world debut of ‘Maria De Buenos Aires’ was premiered at Sala Planeta venue, in Buenos Aires, around or actually during the national and global developments and upheaval of May 1968. However, this time around, the host venue was Antwerp’s historical and splendid Toneelhuis’ Bourla-Schouwburg, in that city’s “Theaterbuurt”. A theatre and concert hall, dating back to the early 19th century, which still retains many original features from then. Built on former textile trade premises; so yet another example of urban renewal and development using deindustrialized sites and areas for completely different and often cultural purposes – only far predating more recent times and our present day & age. Another interesting factor is there has been a long tradition of charitable and fundraising benefit events presented at the Toneelhuis’ Bourla-Schouwburg – which the Zvezdoliki ensemble and the Noot Voor Nood outreach program and initiative are continuing. Reminders that all such tendencies and phenomena are nothing new – being constant and ongoing – like everything else – whilst forever progressive and evolving. The performance itself enjoyed an impressive (or even enviable!) audience-turnout; including those, perhaps otherwise less prepared or actually able to consider or attempt undertaking such an experience; a satisfactory fulfilment of the prime hope, intention, aim and plan. The Zvezdoliki ensemble were joined by especially chosen and sympathetic musicians and singers. Not just some mere support-act, session-artistes, backing-group, secondary-extension or anything like that; but instead, proper equals, fully included, truly contributing, to the overall entirety. Audience engagement and fascination. Dedicated musicians and singers. Endlessly, all along, from expectations beforehand, then at the start, throughout the performance itself, until after the ending. A maybe obvious comparison or similarity is to classical Greek drama (which could have been intended by Piazzolla and Ferrer), because of the commentary and narration, as well as implied action and also occasional masks and other props or minimal costume. Each musician and singer could be distinctly heard and appreciated, amidst tremendous balance, harmony, belonging and togetherness. Effort was demanded to hear and listen, even for those unable to follow or use Spanish language. True specialness and magic proved impossible to avoid, ignore, resist or deny. The only missing reaction was mass breakout of accepting defeat and surrender to urge for joyous and wild dancing. The Zvezdoliki ensemble and the other musicians and singer’s heartfelt energy and vibrancy made an electrifying atmosphere and buzz, causing uplift and widespread pleasure. Another notable and praiseworthy distinction is the untiring help, welcome and friendliness that tuntiring help, welcome and friendliness that the personnel at the Toneelhuis’ Bourlaschouwburg showed and gave to the Zvezdoliki ensemble and the singers. Lasting impression created, leaving a desire, hunger and need for still more. Finally, thanks must go to Antwerpen District / Burgerbegroting, ProArte and De Pianotemmer for their support. * Zvezdoliki ensemble, begun in 2009, named after Igor Stravinsky’s collaboration with Russian symbolist poet and author, Konstantin Balmont (which was premiered in Brussels), whereby historical and recent music and instruments are deprioritized – whilst otherwise overlooked similarity is considered ; Zvezdoliki has always stayed creative, adventurous, unaligned, independent and original. © Douglas Park (U.K. based and internationally active visual artist, author of literary prose and critical essays, also exhibition curator, as well as all practices combined.)