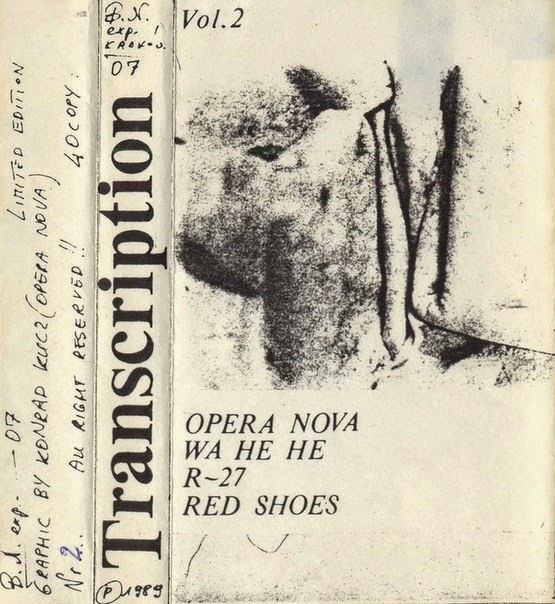 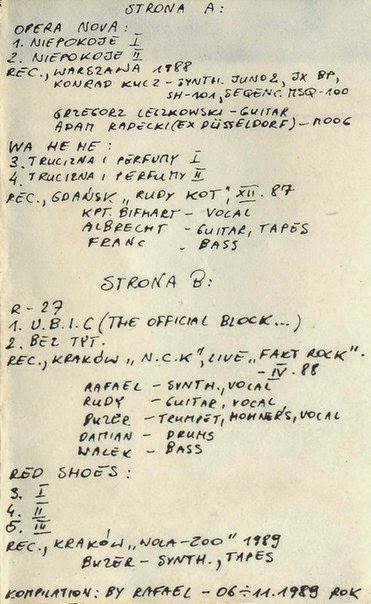 Transcription Vol. 2 compilation, catalogued 07 and compiled 06.11.1989 by Rafael on Polish label BN.exp. Krakowran by twins Rafael and Damian Kozub from Krakow. Their releases were mostly limited as they created the label to publish their own creations.

Damian Kozub & Rafael Kozub, Cracow (Poland) duo’s activity dates back to late 70’s. The twin brothers, multi–instrumentalists–Rafael and Damian, started playing when they were kids in a band Pantograf that was a part of municipal transport corporation. The brothers created their own band a bit later with their then bassist (later the lead singer and the guitarist of the Cracow blues formation KGB) Paweł Małysiak "Pawka".

Their activity of that time as well as studio recordings were still little bashful. Between 1982 and 1988 they recorded their music on tapes at a home studio and distributed them in Poland and abroad in samizdat by three publishing houses: B.N.exp, ARS2, AML.

In 1986 Damian and Rafael started another group Fragmenty R–27 (later called simply R–27) Encouraged by another band’s success (ZAOS) R–27 they continued their artistic performance for the next four years. The line–up changed over the years: Andrzej Jarzyna was the first drummer, Piotr Nodzeń was the second bassist and Darek Kaszubski played bongos, still the core members stayed invariable: Rafael Kozub (keyboard and percussion, vocals and composer), Damian Kozub (percussion, vocals, piano and composing), Rafał Walczowski "Walek" (bassist), Piotr Łabuzek "Buzer" (trumpet, vocals and synthesizer) and Paweł Ochel "Rudy" (guitar and vocals).
Apart from tape recordings the brothers published numerous brochures, papers such as: Alter – edited with Robert Kramaric and features – later used by Henryk Palczewski in his guide ARS2. In 1988 the brothers started publishing cooperation with Mariusz Błachowicz and in the middle of 1989 met musicians: Ireneusz Socha, Arkadiusz Franczyk and Andrzej Kramarz (Kirkut–Koncept and Na Przykład) with whom they recorded "Sen Wczorajszy" in October 1989.

The brothers gave a lot of concerts with this controversial band in their home town Cracow (at a club and Podwawelski Cinema, twice at Nowohuckie Culture Centre (NCK), at Wola Zoo Club and Białoprądnicki Manor House, etc.) They also took part in a few big events such as: in Skawina – "O.D.K" club , in Katowice – "Akant" student club, at a "Festiwal Muzyki Odjazdowej", "O To Chodzi" club in Rzeszów, in Warsaw – "Remont" club and at "Marchewka" Festival in "Riviera" club – together with the composer Zbigniew Lampart – the then manager of Ludwik Solski Theatre in Tarnów. The mistrust towards those vigorous performances, however very remote from post–punk culture, that the band would give, made R–27 abandon further tours and giving accidental gigs.

On emigration the brothers pursued solo careers. Having settled down in Rhineland – Westphalia (Germany) they carried out their musical projects till late 90’s – especially Damian who recorded even till 2007. The projects have been published on tapes and CD’s. His later attempt to start a band with Peter Sohn from Wuppertal wasn’t successful. 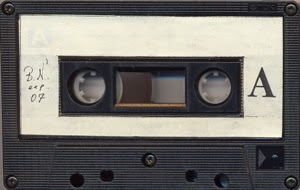