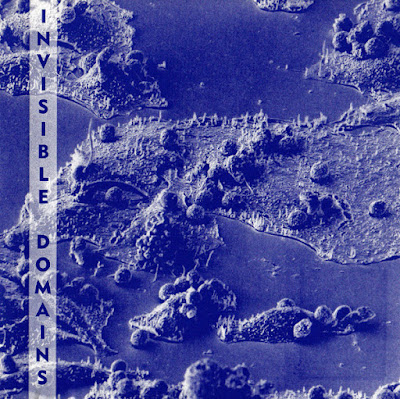 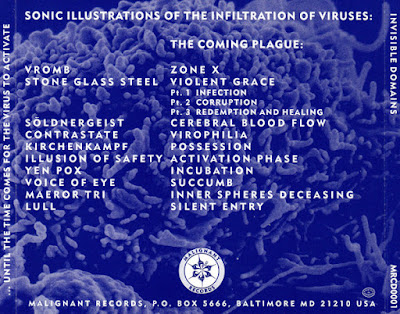 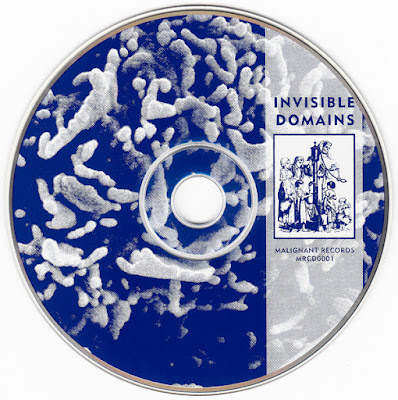 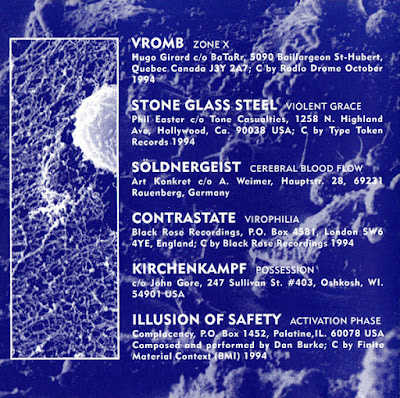 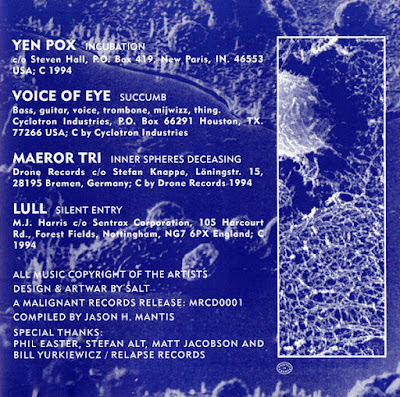 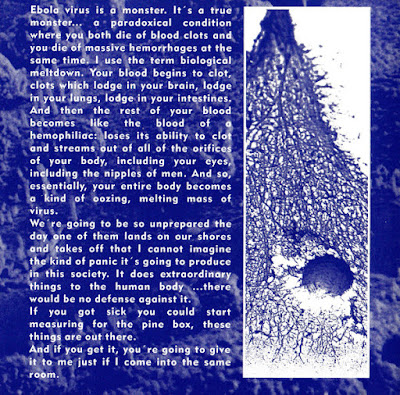 Bringing together the leading experimenters from around the globe with one common theme - to portray viral infections in all their guises. So huge amounts of potential there. VROMB take the Ebola theme of the album and sets gentle noisework against a distant tribal rhythm. Sounds not unlike a collaboration between VIDNA OBMANA and WHITEHOUSE might sound - heaven forbid such a fire-and-ice meeting of forces were ever to happen, but the calming warmth mixed with shrill scratchiness works incredibly well. STONE GLASS STEEL's track(s) are more narrative than descriptive - painting the virus from the outside rather than experiencing it from within. This is more an experimental noisework and evokes nothing like what the alien invasion of a virus might be like. It steals snatches of choral music (from "Glory" maybe) and becomes itself the virus, taking over an existing body (of work) to transform it into something else. SOLDNERGEIST again use noise, with some of the harsh bite taken out, but nevertheless still extreme and grating, cumbersome for the lack of 'top'. CONTRASTATE never really let us down, and this time they have created a soporific drifting piece of Horror Film drama over which cicada-like noise rises up. Minimal - I mean Minimal percussion is used to give the piece a little structure. It then heads into a darker simmering primal soup, gentle but with enough weirdness to give it a black drama. KIRCHENKAMPF follow the mood perfectly, only disturbing it now and again with sudden shocks of sound which crash out of the speakers like electronically-altered thunder. A long track with plenty of changes - hot, though. ILLUSION OF SAFETY take human voice, mash it all up with fx and feed it back to us as a complex, machine-born loop before taking us on an almost toneless sequential journey which finally ends with a mountain of raw noise. YEN POX return to a gentler, more Isolationist area, where the virus is insidious, entering quietly, unannounced. Passively churning coils of noise grow gradually into progressively noisy moments. The sound of structures fed through thick fx (slapback echo?) heralds the arrival of VOICE OF EYE's contribution. This is a group who never let you down, and their metallic-flavoured slow journey rocks no boats as far as that goes. Dark, with shapes wrought out of a shared nightmare between H.R. GIGER and H.P. LOVECRAFT, this is a journey through a dark place, where even the singing of angels cannot help you in your hour of dread. MAEROR TRI bring us the penultimate number. Distant drumming like heartbeat forms the foundation for a track which transforms but slowly. It builds up in gradual metamorphosis, keping the passive feeling throughout, leaving the way clear for LULL's track, and indeed the album's concluding piece. MICK HARRIS never lets you down, and this piece hearkens back to when the first couple of LULL albums came out. Passive, harmless yet it's very calm disturbs the listener.
A bit of a mixed bag album, but mostly good descriptive stuff. Nothing here actually chilled me to the bone, which the idea of Ebola and other such nasties does, but perhaps I'm just a little jaded. Certainly one to turn the atmosphere a tad colder, and to dim what light you have.

"Sonic illustrations of the infiltration of viruses:
The Coming Plague:"